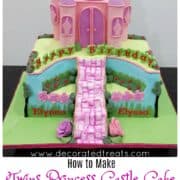 Here is another one of my castle cakes and I call this one twins princess castle cake. It was made for a set of twin girls for their first birthday. The design and colors were made to match that of the image shared by my customer.

This was the design my customer referred to. The princess castle itself was a ready made topper. In fact, this image itself was taken from an online store selling the castle topper.

Based on the image, I figured out that the cake was decorated with buttercream. However, since my customer wanted fondant, I recreated it as close as possible to the image and colors provided. And the image also shows the cake being airbrushed. My airbrushing skills are nowhere near good, so I told her I can only make a single toned color and my customer was OK with it. She also wanted the castle to be made out of cake, so that was how I made it for her.

How to Make the Princess Castle Cake

The rest of the deco on the cake

Side view of the princess castle cake

Side view of the princess castle cake

And that my twins princess castle cake.