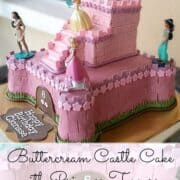 Every time I look at these cakes, Clarisse’s mom, Fanny comes to my mind. Fanny lost her battle with cancer a few years ago leaving her 2 young children behind. The news of her passing really came as a shock to me.  My heart goes out to the lovely children every time I see them. I hope these cakes will bring about happy memories for dear Clarisse of her lovely mom.

In fact, this was the last cake Fanny ordered from me. And I am so glad I took the order.

This was supposed to be a simple buttercream castle cake. And I used toy princess toppers to turn the cake into a princesses castle cake.

The main difference between this castle cake and the one I made for Clarisse previously is that this cake is covered in butter icing while the other cake was decorated in fondant. And this cake has all the princess dolls on while the other one did not have any princesses but had yummy M&M candies on.

Overall, I was happy with the first tier of this castle cake, but the second tier could have been better as the sides were not straight. And I’ve taken a mental note to pay more attention to the sides of cakes especially small cut out ones when covering them with butter icing.

How to Make a Buttercream Castle Cake with Princess Toppers

These were the main supplies I used to make and decorate this cake:

And this was how I put this castle cake together:

The lettering on the castle cake