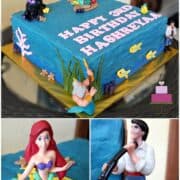 I made this Ariel the Little Mermaid cake for little Hashreyaa on her 3rd birthday. This cake is one of the many cakes I have made for this little girl and her brother, Arya. Hashreyaa’s mom is a special customer of mine who happens to be my sister’s close friend and I have always enjoyed decorating cakes for her as she truly appreciates the taste of my cakes and my decorating.

Anyway, back again to the cake. Overall, this was a pretty easy cake to decorate. All the figurine toppers on the cake were toy toppers provided by my customer and the rest of the decoration on the cake was made using fondant.

Let’s look at my decorating guide for this Ariel the Little Mermaid cake below.

How to Make Ariel the Little Mermaid Cake

Sea effect on the cake

And that’s that. My Ariel the Little Mermaid cake.