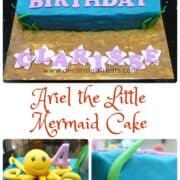 I made this Ariel the Little Mermaid birthday cake back in 2012. It was for a 4-year-old girl. The mom had also separately ordered a castle cake for the school celebration (click here to see how I made the castle cake). This cake was meant for celebration at home with family.

How to Make a Little Mermaid Birthday Cake

Sebastian and the octopus toppers

Edible grass on the sides of the Little Mermaid cake

Wordings on the Little Mermaid cake

Wordings on the Little Mermaid cake

And that was it! An easy to make Little Mermaid birthday cake.