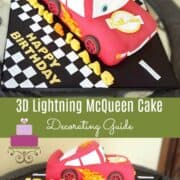 I made this 3D Lightning McQueen Cake for a double birthday celebration of 2 brothers. I have made 3D car cake once before. But that was using a shaped cake pan (you can read all about it here). This was my first time ever making a carved 3D car cake. I must say, I was quite happy with the way the cake turned out for a first timer.

This was not a very large cake. I carved the whole car out of 2 rectangle cakes. Both measured 6 inches by 10 inches and were approximately 2 inches high. To match the theme of the cake, I decorated the cake board to look like a road. The cake was placed on this sugar road. The sides were decorated in black and white square checks.

Overall, this Lightning McQueen cake did not take very long to decorate. Though this was a carved cake, the carvings were not very complicated. I could finish decorating the whole cake in a matter of 2 to 3 hours.

Covering the car cake with icing

Decorating the cake board

The lettering on the Lightning McQueen cake

And that's pretty much it. My 3D Lightning McQueen cake.