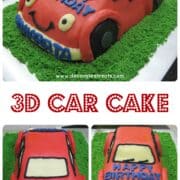 A perfect car cake design for boys. This buttercream, car themed birthday cake is baked in a 3D mold and is super easy and simple to make!

The 3D car mold is from Wilton and is very easy to use. You have to make sure it is well greased and floured. This is so that your cake comes out easily without sticking to the tin. This is particularly important because of the many bends and dents in the shape of the car can pan. These bends and dents make it hard to use a knife or spatula to help in releasing the cake.

In terms of decorating, the car shaped cake can be covered with both buttercream or fondant. I choose butter icing (which is a slightly stiffer version of buttercream) so that made it easier to achieve the smooth icing on the car birthday cake.

There is a little story behind this 3D car cake pan. I initially bought the pan to make a cake in the shape of a car for my eldest boy who was turning 4. I thought a 3D car would surely excite him.

But one look at the cake pan, and he said, “Ma, that looks like an old car! I want a sports car cake!”

So there was a massive change in plan and I ended up not using the cake pan for his birthday.

But my second boy was turning 2 the following year, and guess what? He was absolutely thrilled with this car cake for this 2nd birthday.

I was happy, at least my investment in the cake pan did not go to waste!

I decorated the entire cake in butter icing for a red car. And then I added the 'happy birthday' lettering in blue fondant. The birthday boy's name was also added to the car cake, on its bumper.

I rested the entire car shaped cake on a cake board and piped green buttercream grass all over.

All in all, this was a fun cake to decorate, and one that the birthday boy was absolutely happy with.

How to Make a Car Birthday Cake:

These are the ingredients and tools I used to make the car shaped birthday:

Covering the cake with butter icing

Windshields and side windows

And with that, the cake was done. Overall, this car shaped cake was fairly easy to make, the only thing that took me some time was working with the butter icing as it requires a fair bit of smoothing which I did with my icing spatula.

Here is the full printable version of my easy 3D car cake recipe and step by step decorating tutorial. 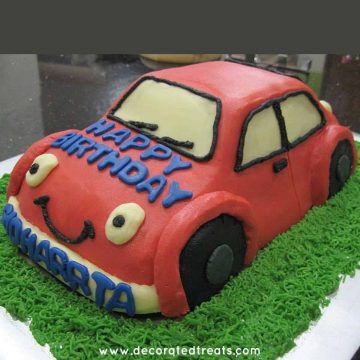 Decorating the windshields and windows

I hope you enjoyed this tutorial as much as my little boy enjoyed his cake!