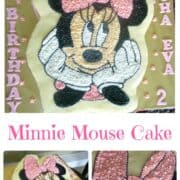 Minnie Mouse cake for a 2 year old girl. Isn’t that so typical for a girl of that age?

Mickey Mouse and Minnie Mouse cakes are evergreen and so loved by children. This was my first Minnie cake and I was as excited to make it as the birthday girl was to have it for her birthday. The thing about this cake is that it was not baked in a specialty mold or cake tin. In fact, it was cut out of a rectangle cake. And Minnie’s pose on the cake, it was directly from an image provided by the birthday girl and her mummy.

Cute and pretty Minnie Mouse cake for my niece

I decorated this cake using an image transferring technique I have used very commonly for many of my cakes. And it works very well for me especially when I have to decorate sheet cakes in customized shapes and images.

How to Make a Minnie Mouse Cake

And this was how I decorated the Minnie Mouse cake:

Minnie Mouse sheet cake in buttercream for a 2nd birthday