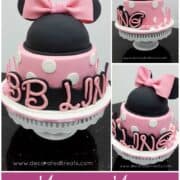 Here is a pretty Minnie Mouse cake design for Minnie Mouse fans. This one was decorated based on an image provided from my customer who requested for the cake to be made in the exact same design as the image, except that the name is customized to hers.

This cake was decorated a couple of years ago and I tried to locate the image that my customer gave and even did an internet search to locate it, but I could not find it. This cake is almost an exact remake of that cake except for the name on the front of the cake. If you happen to know or have seen a similar cake elsewhere, pls let me know below so that I can credit the designer accordingly.

Back to this Minnie Mouse cake design, though it looks simple, attaching the name was quite tricky. If you notice carefully, the name plaque is standing on its own and not leaned against the cake or anything else. And since it was rather heavy, it was quite a struggle for me to put it up.

Other than the name plaque, everything else on the cake were pretty straightforward.

Lets see how I executed this Minnie Mouse cake design below.

These were the main supplies I used to make this Minnie Mouse cake design:

Making the bow for the 3D Minnie Mouse head cake

Putting on Minnie's ears on the cake

And that's pretty much how I completed my Minnie Mouse cake design.

Like this Minnie Mouse cake design? Here are my other posts you might want to check out:

Here is the full printable version of my Minnie Mouse cake recipe and decorating tutorial. 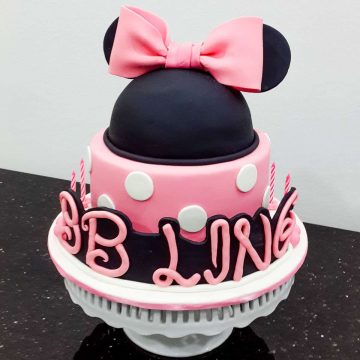 Baking the cakes (The cakes are best baked in 2 batches (by tier). Follow the instructions below for each tier)

Attaching Minnie's ears and the bow