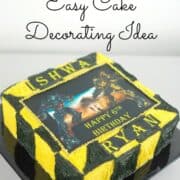 Here is a simple Transformers cake I decorated for my nephew's 6th birthday over the last weekend. The Transformers theme was his choice of course. And he likes Bumblebee the most, hence the yellow and black overall theme for his cake.

I call this a simple cake for 2 reasons. Firstly, it was a relatively small single tier cake measuring 8 inches by 8 inches in width and length, and a height of about 3 inches. Secondly, it was decorated with basic piped buttercream design and topped with a printed edible image of Transformers. All this did not require as much time, hence a pretty simple decorating idea.

I was not the one who baked this cake. It was baked by my sister (my nephew's mom) and she sought my help in decorating the cake. I have shared my cake recipes with her. So the cake was baked using my butter pound cake recipe (this is our family favorite!). She also got the edible image ready (from a local shop). And even got the buttercream mixed. So all I had to do was mix in the colors and decorate the cake.

The cake itself was a single layer cake, and there was no filling inside. My sister preferred it that way. And so, all I did before decorating the cake was crumb coat it so that the sides and top were all level.

How to Make a Simple Transformers Cake

The square designs on the cake

The birthday boy's name in edible image on the Transformers Cake

The gold dragee frame on the Transformers birthday cake

With that, my simple Transformers cake was ready.

This was the party dessert table at the birthday party:

The Transformers themed dessert table in yellow and black

Hope you enjoyed reading this.