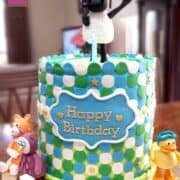 Anyone looking for a Timmy Time birthday cake idea? Here is one such cake I made for my youngest boy’s 1st birthday. And why did I choose Timmy Time? Because it was his favourite show then! I still remember how he would shake his body while holding on to our coffee table, dancing to the song from the Timmy Time show every afternoon. And this was at an age when he was not even able to walk properly yet!

If you have watched Timmy Time before, you will notice that there will be hardly any words spoken in the show, its all merely the different sounds made by the characters as they carry on the show. Its quite amazing how plain action-based shows like this can attract toddlers’ attention so well.

The main character in the show is Timmy the lamb and each episode will depict his various adventures in school, along with his friends, Yabba the duckling, Mittens the kitten, Otus the owlet and a handful of other animal characters.

So back to the birthday cake. Since my boy at the age of one, enjoyed the music and the show so much, I decided to make him a Timmy Time themed cake for this 1st birthday. It was a double barrel cake measuring 7 inches in diameter. The cake was decorated in both buttercream and fondant and I made 4 toppers based on the characters from the show with Timmy being the main topper. Let see how I made and decorated the Timmy Time birthday cake below:

These were the main supplies I used for the cake:

This was how I put the Timmy Time birthday cake together:

Yabba the duckling cake topper for the Timmy Time Cake

And that’s that.  Timmy Time birthday cake for my son's 1st birthday.

Hope you like this Timmy Time birthday cake idea.