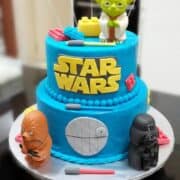 I made this Star Wars Lego cake for a dear friend who requested it for her son’s birthday.

This was not a very complicated cake to make. The Star Wars character figurines were all toys which she provided. The rest of the decoration including the lego blocks and the lightsabers were made of fondant. Even the Star Wars logo was cut by hand.

How to Make a Star Wars Lego Cake