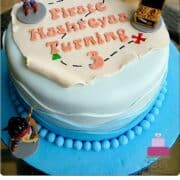 Here is one such easy idea you can consider. I call this an easy to make cake simply because I used toy toppers to decorate the cake. All the figurines on the cake were provided by my customer. So the rest of the deco on the cake in fondant was the only thing I added to the cake.

And if you can see the cake above, the rest of the decoration on the cake is not that complicated either. But it still follows a ‘pirate’ theme. So all in all, it was an easy cake that would definitely please any child who loves Jake and the Never Land Pirates show.

How to Make a Jake and The Never Land Pirates Cake

And this was how I assembled the Jake and the Never Land Pirates cake:

Toy Toppers for the Jake and the Never Land Pirates Cake

The first layer of sea waves

The second layer of sea waves

The third layer of sea waves

The wording on the cake

Jake and the Never Land Pirates cake with toy toppers and an edible treasure map.