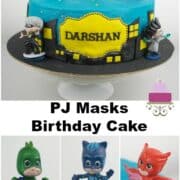 I made this PJ Masks birthday cake for my little hero who turned 5 last week. We actually went through a couple of cake designs before he settled for the PJ Masks theme. He wanted something more elaborate initially but his working mom did not have the luxury of time to make one like that so he settled for something a lot less simple.

The entire cake was covered in butter icing. And the PJ Masks figurines were all toy toppers I purchased from a local cake decorating shop.

We celebrated the birthday at a local community center where my boy attends language classes on Fridays. I also had party packs packed for all his friends there. Everything took a considerable amount of my time. So I had to take a day off from work to get all these done. I baked and decorated the cake in one day and also had to squeeze the time to pack the party packs on the same day. Though it was tiring, the happiness on my boy’s face celebrating his birthday with his friends made every effort that I have put in extremely worth it! And most importantly, he was totally happy and has already started counting down for his next birthday!

Windows on the buildings