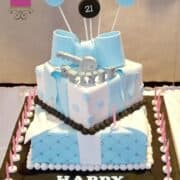 I made this baby blue girl 21st birthday cake for sweet Pei Yie’s 21st birthday. I was quite surprised by her choice of baby blue as the theme color for the cake. Typically, young ladies and girls would often go with more feminine pinks or purples for their cakes. Baby blue is a very sweet color nevertheless, and I truly enjoyed decorating this cake for her.

To be frank, this girl 21st birthday cake design was not my original design. I tweaked it based on an image provided by my customer. And I traced the design on the internet and found it to be by Michelle from Inspired by Michelle (www.inspiredbymichelle.wordpress.com). Michelle’s original color of the cake was tiffany blue and did not have the 3D key nor the lettering. She, however, had a tag with an alphabet “T” on it. Based on my customer’s request, I omitted the tag but added a 3D key to the cake and the birthday girl’s name in 3D letters. Here is Michelle’s original girl 21st birthday cake as shared by my customer:

Overall, I must say that this baby blue 21st birthday cake was pretty straight forward to decorate. The only part where it went a bit tricky was with the bead borders for the first tier. Since the cakes were not stacked in an aligned position, upon stacking, I realized that the corners of the top tier ended right at the edges of the bottom tier. This meant that there was no support for the bead border around these corners of the first cake layer. Lucky for me, I had my fondant glue to the rescue. I attached with border beads with the glue. And I held them in place for a few minutes until they were secure in place. Let's see how I decorated this baby blue girl 21st birthday cake below.

How to Make a 21st Birthday Cake

The 3D key topper for the 21st birthday cake

The birthday lettering and candle holders

And with that, the girl 21st birthday cake for Pei Yei was complete.

Hope this gives you inspiration for your own girl 21st birthday cakes.