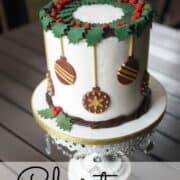 This Christmas cake decorating idea came about last year, and as much as I wanted to post it last year itself, it somehow got delayed until now. And since its just a few weeks away for Christmas this year, I told my self I have to get this cake idea up on my blog.

And so here it is, an easy Christmas cake idea incorporating my favorite Christmas deco items – a lovely wreath decorated with holly leaves and berries and pretty maroon baubles decorated in gold.

Overall, this was not a very hard design to assemble. In fact, it can be put together in a fairly short period of time.

These were the main supplies I used to come up with this Christmas cake design:

And this was how I put the Christmas cake together:

The gold stripes on the baubles

Attaching the baubles to the cake

And that’s that. My easy Christmas cake decorating idea.