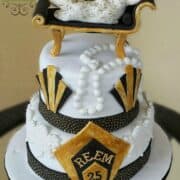 The cake was not very difficult to decorate but I did face some issues with the chair!. It was quite tricky to get it to stand on its legs. This is because the chair, with the human figurine on it, was heavy. I managed to put it up somehow. But I would definitely take note to make sure the legs have had sufficient time to set and harden before I put it up on the cake next time.

Other than that, everything else on this Great Gatsby cake was pretty straightforward. This Craftsy class I took on how to make fondant figurines was absolutely helpful in making the topper on the cake. And it has also helped me greatly in making my human figurines for my other cakes too.

How to Decorate a Great Gatsby Birthday Cake

The black and gold plaque on the Great Gatsby cake

And that's that. The Great Gatsby birthday cake.