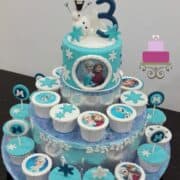 I made this Frozen Olaf cake and cupcakes for a 3-year-old girl some time back. The mom requested for a Frozen cake with Olaf, Anna and Elsa’s images on it, and she also requested for a matching set of cupcakes to go with the cake. Also, she wanted all these to be displayed on a cupcake holder. I did not have any cupcake holders to rent out to her and suggested that I make one instead. The mom was very receptive to the idea and so I set on making the cake. And the cupcake holder.

Since it will be a very long post to combine all tutorials on one page, I am covering the Frozen Olaf cake and cupcakes on this page, and the cake holder in yet another page. I have also written a separate tutorial on how to make the 3D Olaf cake topper (including a video tutorial), so you can see the detailed step by step guide on making these on those respective pages.

How to Make Frozen Olaf Cake and Cupcakes

Main supplies for the project:

The cupcakes with Anna and Elsa edible images

And that's that. My Frozen Olaf cake.

Hope you find this useful. Please let me know you thoughts in the section below.