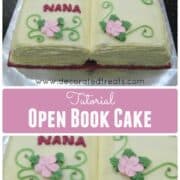 Books are a great inspiration when it comes to novelty cakes. 3D open book cakes can be designed in many forms. It can be a single closed book, a stack of closed books, or an open book.

Book cakes may sound difficult to make but in reality, they are fairly easy even though a bit of carving is required on the cake. Here is one such book cake I have made. It’s an open book cake idea, and the decoration was done entirely in butter icing.

How to Make an Open Book Cake

This is what I used to make the book shaped birthday cake:

Decorating the book cover and pages

And that was how I decorated this open book cake.

I hope this tutorial was helpful.

Like this open book cake design idea? Here are my other posts you might want to check out:

Here is the full printable version of the open book cake recipe and decorating tutorial. 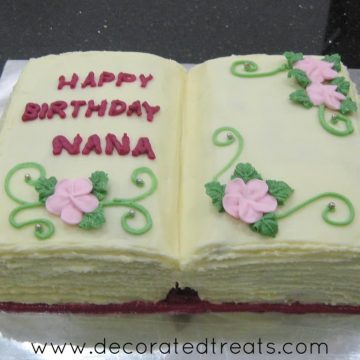