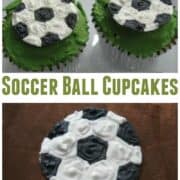 The cupcakes are baked in silver foil casings and covered with green frosting. Each cupcake is then topped with completely edible soccer ball toppers. The best part is, these soccer ball toppers can be made in advance which means no scrambling at the very last minute to get them done!

This cupcakes design was inspired by a football cake I decorated not too long ago. I had leftover frosting from decorating the cake and thought I would try decorating some cupcakes with the same soccer theme.

And so that’s how I came up with this soccer themed cupcakes idea. These cupcakes will make a great decorating idea for boys on their birthdays.

The base cupcakes are my chocolate cupcakes. I baked them in silver cupcake liners. I then topped each cupcake with a simple coat of royal icing. Royal icing sets hard and brittle when it dries and is made entirely with icing sugar and egg whites. If you don't like royal icing and prefer something creamy, you can also use buttercream.

How to Make Soccer Ball Cupcakes

Here is what I used to come up with these easy soccer cupcakes:

The soccer ball template for the edible toppers

And that is pretty much how I made my soccer cupcakes with edible royal icing ball toppers.

Here is the full printable version of my soccer cupcakes recipe and decorating tutorial. 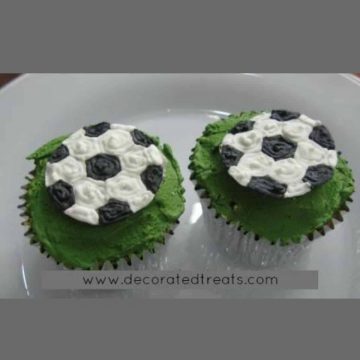 Hope you enjoyed this tutorial.