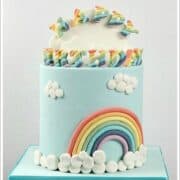 Here is a rainbow birthday cake I made for a customer recently. The theme was 'rainbow in the clouds', hence I designed this birthday cake for her.

The cake itself was pretty simple, with a 2D rainbow on the side and lots of clouds at the base of the cake, the sides as well as on the top. And to add more rainbow colors to the birthday cake, I made the "HAPPY BIRTHDAY' letters in rainbow colors too!

How to Make a Rainbow Birthday Cake

And this was how I assembled the rainbow birthday cake:

The rainbow on the birthday cake

And that was it. My rainbow birthday cake.