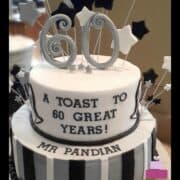 Here is a 60th birthday cake I decorated a few years ago. I was browsing through my cakes file this morning and my eyes caught on this cake. And I realized, I only had one image of the cake, much to my disappointment. I can still remember the stress of having to deliver the cake and with all that tension and time, the last thing on my mind was to take good photos of the cake. And I totally regret it now.

In fact, the only image of the cake I have is the one I took of the cake once I delivered it to the hotel where the celebration was going to be held (the cake picture below). And the picture was sent to my customer as proof that I have delivered the cake all in one piece!

I decorated this birthday cake almost about 5 years ago. It was for a customer who was looking for a cake to celebrate her husband's 60th birthday. She had her own idea of how she wanted the cake to look like and presented me with a photo of the design.

As usual, I did a search on this 60th birthday cake design on the internet. And found it to be originally designed by The Pink Cake Box.

Now, this black and silver 60th birthday cake was really fun to decorate and pretty challenging too. I must admit I had never decorated cakes with 2 different background colors on the same tier. The second tier of this cake was just that, the sides were silver and the top was white. Silver had to be painted or sprayed on. And to get a perfectly straight separation line between these 2 colors right on the edge of the cake, though looks easy, was in fact not that easy.

I chose to spray paint the sides. So I had to figure out how to do it without the paint particles landing on the top of the cake too. You know how the spray works. The paint particles fly to a much larger area than the one you intend to paint.

I figured out that I would cover the cake entirely in white. Once done, I turned it upside down onto a clean cake board. And then I sprayed it in that position so that the top was covered. Once completed, I turned it over again, each time making sure I did not touch the cake directly, but through cake boards.

Read below to find out how I decorated the rest of the 60th birthday cake.

And this was how I put this birthday cake together:

The black and white stripes

Attaching letters to the side of the 60th birthday cake

And with that, the black and silver 60th birthday cake was complete. I removed the stars and the number toppers when transporting the cake and only put them on once I reached the event venue. It was so much less stressful that way and safer too!