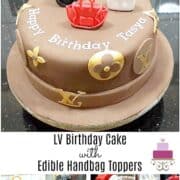 I made this Louis Vuitton cake with 3D handbag cake toppers quite a few years ago and it was decorated for someone I knew who wanted to celebrate her colleague's birthday. I still remember how exciting it was when she requested for a cake with handbag toppers - I truly enjoyed making those cute little handbags and I must say, they really made a difference on the LV themed cake!

I made the toppers entirely in fondant. And for this project, I used my homemade recipe. This, unlike the store-bought one, dries really firm and hard without having to add any CMC powder to it, so it was easy to use for making 3D decorations on cakes.

I don't quite make my own fondant nowadays because it's quite a lengthy process and I find it more time saving to just use store-bought one. But if you are into making your own, you can check out my homemade recipe here.

Back to the Louis Vuitton cake. This was a single-tier cake measuring about 8 inches in diameter. I covered the entire cake in brown and used Louis Vuitton monogram and pattern all over the cake. Since I did not have any special Loius Vuitton design molds, all the patterns on the cake were made using my round, 5 petal flower, and daisy flower cutters. And I used gold paint to add gold color to them.

The most challenging part of this Louis Vuitton cake decorating process was making the LV monogram in 3D form that I placed on the bottom border of the cake. I did not have any LV monogram molds, so I had to make my own by drawing it out on cardboard. I then cut the initials following its outline and used the cardboard as a template.

For this purpose, I used gum paste. I have to admit, it was really a challenge to cut the monogram out, simply because the gum paste was soft and the initials were very thin. I should have let the gum paste set a little before working on it. But at that time of doing it, it did not cross my mind. I somehow managed to cut it out (with much stress) and was quite relieved to be able to use it on the cake.

Overall, I truly enjoyed decorating this cake and as I am typing this, I am actually thinking that it will probably be interesting to try make even cuter bag toppers for cupcakes - but I will leave that for another day for now.

And this was how I put this birthday cake with handbag cake toppers together:

Louis Vuitton monogram on the cake

And with that, my Louis Vuitton cake was complete.

Hope you find this useful 🙂