This gorgeous happy birthday cupcakes make the most perfect cupcakes for the women in your life. They are completely homemade, quick and easy, and will definitely make a happy birthday celebration!

Cupcakes for Birthday - An Awesome Idea

Birthday cupcakes are a cool alternative to the normal standard cakes.

Firstly it’s easier to estimate the serving size with cupcakes (you just need to know how many guests will be there and you address that by making cupcakes in the exact same number, or maybe more if your customer requests so).

Secondly, it’s much easier to serve! There is no need for someone to cut and serve. Everyone just takes a cupcake each and help themselves!

And thirdly, there can be more than one flavor for the cupcakes as opposed to a standard cake where the flavor is limited to just one.

The only downside to birthday cupcakes, which I think why most people would still prefer standard cakes is the cake cutting part. Cutting a cake is more symbolic. With cupcakes, there is no cake cutting as it is not necessary when the cakes are already in separate casings!

Nevertheless, cupcakes are a great choice if you are looking for something out the norm for birthday cakes.

I choose an overall floral theme for my mom's birthday cupcakes with main emphasis on small sugar roses in pink and yellow. The rest were with hearts design as well as simple white filler flowers in buttercream.

These happy birthday cupcakes were a slight variation from the norm as we normally have large cakes for birthdays. So when I presented the cupcakes at the party, they immediately became a huge hit. The kids were particularly excited with the cupcakes, choosing over their favorite letters and designs on the cupcakes.

Here is what I used to come up with this happy birthday cupcake design:

The 'happy birthday mummy' lettering on the birthday cupcakes

And that’s how I decorated the happy birthday cupcakes for my mom.

Hope you enjoyed this cupcake idea!

Like this Happy Birthday Cupcakes idea? Here are my other posts you might want to check out:

Here is the full printable recipe and decorating guide for my happy birthday cupcakes: 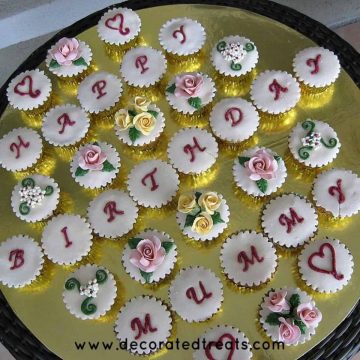 And that's that. My pretty and easy Happy Birthday Cupcakes recipe and tutorial.