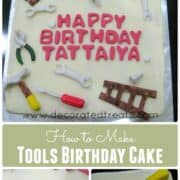 I made this tools birthday cake for my dad’s birthday. This was made a few years back (and I cannot recall which year, and so don’t recall which birthday it was for him!) and the idea of making a tools cake came from one of these favorite activities which is carpentry.

My dad loves carpentry for he was always up to making something at home, and in fact, he literally made most of the furniture we had at home on his own. His had his own workspace at the back of the house and he owned all sorts of carpentry tools! So on his birthday, I decided that a tools birthday cake would be suitable for him!!

How to Make Tools Birthday cake:

Tools to make the birthday cake:

Screwdriver made of fondant

Bolt made of fondant

Baking and frosting the birthday cake

Fondant alphabets for the cake

Again, attaching the fondant tools to the birthday cake was easy. There was no need for any special glue to hold them in place. I simply pressed them gently into the butter icing on the cake and that helped to secure them to the cake.

And that was pretty much how I made the tools birthday cake.

My father had a big smile on his face when my children and I presented the birthday cake to him.

Hope you enjoyed this tutorial 🙂