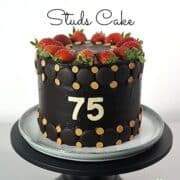 I made this chocolate butterscotch studs cake as my dad's 75th birthday cake. This was an impromptu design and I managed to bake and assemble the cake all in about 3 hours.

I don't normally quite like to bake and decorate my cakes on the same day, but this cake was special. There was a last minute change in the plan on the party date. We initially planned the party on the birthday itself and found out 2 days before the party that my dad had classes to teach on his birthday (my dad still actively teaches language in our community center). And so we decided we would celebrate one day earlier as it was on a Saturday and everyone was at home.

My sister and I decided to throw a pot luck party, I made some dinner dishes and the cake and she did some other dinner dishes. So that left me with not much choice but to cramp all the cooking, baking and decorating into one day!

That then meant that I had to keep the deco for the cake as quick and easy as possible and so I decided to use ganache and decorated the cake with chocolate buttons and butterscotch chips and fresh strawberries.

Here are the full details of how I decorated this 75th birthday cake for my dad:

These were the main supplies I used for the cake:

And this was how I put the 75th birthday cake together:

Adding the numbers 7 and 5 for the 75th birthday

What do you think?